Marcel wrote:Skydive, I've tried out your cpanel icons from Jan 6. I know it's just for practice but I must say I like it. It's legible and functional and matches the UI fairly well. One quibble, the glow or reflection at the top of the scanner area makes the distance and speed information harder to read. I think that the real control panel is going to be awesome!

Hi Marcel, I have played around with various cpanel shapes and forms, there you go https://app.box.com/s/kkxyf8yylr60wg57nzd4z0c73so0bypn maybe you like one of the different once better, although to be hones I am not happy with any one of them as some look OK in one situation and absolutely terrible in another. My main issue is with the mess of text all over the screen.
Top

@Skydive
Those texts on the HUD are all over the place for sure. But this gives me an idea.
And yes, you could be right about the amount of data around the scanner. It might be too much, but I think we need to try that in action to see, if it works or not.
Top

Skydive wrote:I re-worked the concept a bit more. The previous version had too many MFD on/off switches all over the screen, So I've added them to the MFD menu, that way they could only be visible if MFD menu was on. Also worked a bit on the control panel layout: time management controls to the left, next ship status indicators, F1-F8 controls , warning indicator, weapons management to the right, narrow bar on the top for text indicators (current system, distance to targeted system, hyperdrive target system, selected target, something like this).

Still not quite happy with the layout, but slowly getting closer.

This HUD is absolutely AMAZING!!!
Well done!
I would just have the scanner a tiny bit bigger (my eyes are not young anymore ;-)

A bit of Navigation UI play, while talking with ecraven on IRC:

A navigation list mockup for the worldview. WIth a radial menu for the most common commands, so you don't need to bring up the details panel. First I put both to the right side, like a stack. You have them both closed, both open, or the list only.
Also added a custom input for any orbit height one might want, and the buttons under it are for presets: Syncronous, Stationary, Low, Medium, High. Not the nicest arrangement for those buttons yet, but it's a start.
The list has icons for body types, and a radial menu ecraven suggested, with the most common commands (clockwise from the highlighted):
Dock, Enter High orbit, Comms/request docking clearance, Hold radial, Hold Normal, Hold Prograde, Enter Low orbit. The Hold directions could be used while holding shift or ctrl or alt, or right mouse, which would instruct the autopilot to hold the opposite of the repsective icon. Comms could work similarly: left mouse would request docking clearance, but with modifier it would open the comms window (if ever will be one).
I'd assume the radial menu would come up on right mouse.
Those icons aren't close to final. 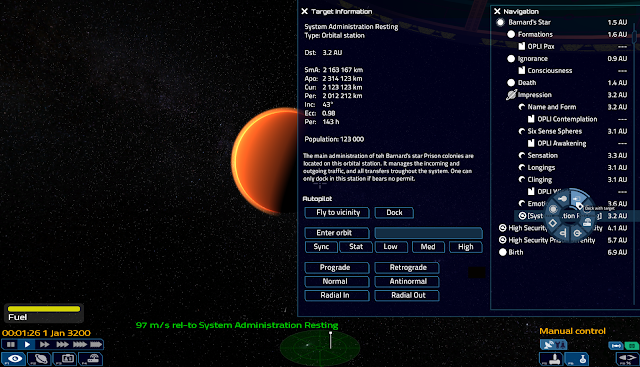 Same, but the panels are on the sides of the screen, so it won't obscure the middle of the screen. Also reduced text size, looks better this way in my opinion. 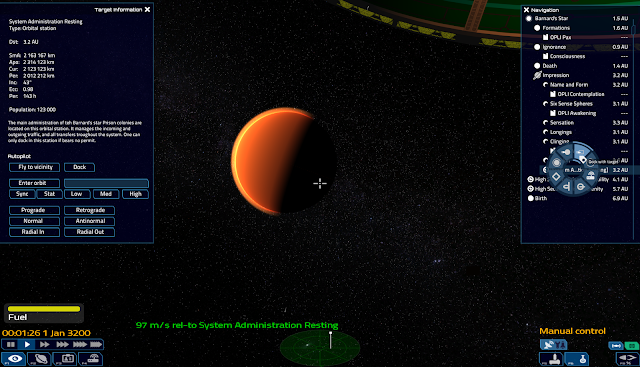 I agree that the second version looks better - maybe shift the radial menu below the right panel, so it won't obscure its contents?

Also, please make sure that there is enough room for translations - I am having a lot of string truncation problems with my translation of Pioneer. An article on the subject: https://www.w3.org/International/articl ... -text-size
Top

The radial menu is supposed to come up only on right mouse or something similar, it's not there all the time. Like the right click menus in windows.
Top

@GunChleoc We are aware of the problems, but fixing them is not as fun as adding some new cool feature. As of 2 days ago it seems like the UI and Lua stuff will see significant improvements thanks to ecraven, and let's hope some dynamic boxes, and line breaking sneaks in there too.

@nozmajner/all If we want crew to be noticeable for the player, then I (and others) had this idea about you give the order to navigate to X to auto-pilot, or some crew member, through the UI. Maybe you assign a crew member to be navigator, then that would replace the autopilot, and the UI would look like above but it said "give order to Mr. X" instead of "Autopilot"? Just something to keep in mind for the future.

(I'm not sure what the benefit of a human navigator requiring a salary would be over an autopilot?)
Top

@nozmajner: Wherever the mouse is on a right-click sounds good.

@impaktor: I know what you mean, implementing dynamic width/height of elements is not trivial at all.
Top

UI improvements??? I can hardly contain my excitement!!! :)
Top