Im happy you like the shape - I was a little worried it might have been too 'similar' - Kaluri would work for me :)


I'd try it with additional more traditional heat sinks complementing the existing ones.

I thought of adding trailing heat sinks but figured they would make the ship feel tail heavy. I wanted to have the side heat sinks to extend out in flight but retract for landings (as viewed). This way we could still have heat sinks but they wouldn't look gangly. I ruled out heat sinks on the wings as I felt it would spoil the shape. I played with the idea of having over-under retracting sinks but pencil drawings dont lend themselves well to multiple versions so they are not there!


make it into a proper fighter

I had it mind to make it more of a courier than a straight up fighter but I guess the scale can be played with. If it ever gets modelled, it will be easier to try out different setups.

Thats an interesting thought - I can just about imagine it having relatively low-key nacelles on the wing tips. It would completely change the shape but would work quite well I think - would need to mock it up.


One thing I'm missing is missile tubes or something similar.

Thats an interesting thought - I can just about imagine it having relatively low-key nacelles on the wing tips. It would completely change the shape but would work quite well I think - would need to mock it up.

No need for extra nacelles. The wings could act as nacelles in my opinion.

Nothing elaborate is needed in my opinion. A bunch of holes, similar to the RCS nozzles, but bigger would do the job.
Top

One could argue that this ship has a pretty high surface/volume ratio, and thus heat sinks are not needed?

I'm very impressed with your drawing skills, and the ship looks very good. Also, RSI sucks, I have it too (the price I pay for using Emacs). Regarding my comment on the wings, I just wanted to find a motivation/excuse for us to have them in a space game. They look very good.

(Also, the Cylon Raider in BSG has (slightly) similar build. But not that much when I actually looked it up. Either way, it should not prevent us for using it.

Thanks Impactor, its been a few years since I last picked up a pencil and I still don't have full control over it yet - I never quite know how things will turn out!

As for the 'wings', I don't think I did a very good job depicting their thickness. By the time they reach the fuselage they were supposed to be... well, er.... thick (or fat or some other word used to describe thick or fat). Their shape was also intended to give it some limited aerodynamic stability for descents through atmosphere. Beyond that they would provide storage for fuel and 'stuff'.

Anyway, I have added enough pollution to this thread, and need to head off to work! :)

(emacs: at least its not vi - I never remember how you actually exit from vi!)
Top 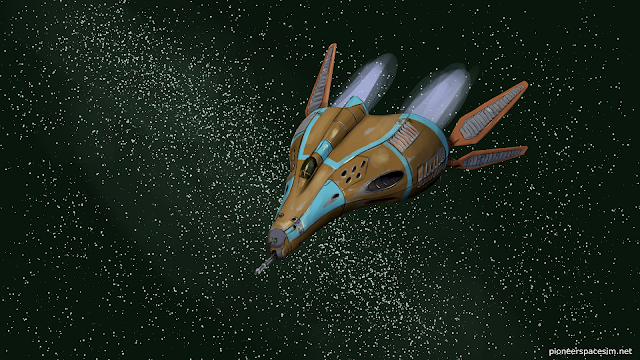 Started from a sketch I made on the subway.
High thrust, sturdy ship. Canopy inspired by Harrier.
Top

However, my eye got slightly confused about where the cockpit was, since the nose of the ship half-looks like one, and is big enough for it.

Also, nice touch with the pioneer-url. Never noticed that before (if you've done it earlier).
Top

Just a thought... Since most ships spend most of their time in space, wouldn't be better to have cockpits on the front, instead that on top. That way you can have a more complete view. Just think about B5's star-furys or the main ship of Rogue System space sim.
Top

I have several things that justify the topside cockpit, even though I'm not that attached to it in general.
For one, everybody recognizes it's based on their current picture for fighter planes, and even smaller planes. And if the viewer knows that that's a cockpit, we already have a good scale indicator.
Sure the top positioned cockpit means limited FOV, but since most of the time things are beyond visual range, it doesn't matter that much. It might make landings a bit harder though.
The other is that this way the cockpit is closer to the center of rotation, so it reduces G loads from sudden rotations for the pilot.
Also the high positioned cockpit could be because the hull needs to house a lot of stuff, so room is precious. Although the pilot's health should be priority for sure.

My general policy is that civilian combat ships have visible classic cockpit, even the police crafts. Military ships have their cockpits deep in the hull, close to the center of rotation, and increased amount of sensors. This is a nice way to differentiate between civilian and military crafts. Like the Kanara sketch somewhere at the beginning of this thread.
Top

It looks mean - does it have a name?
Top

I didn't thought about the name yet, but I'm going to look for one right away, now that you asked. How about Bowfin? It's an aggressive ambushing carnivore freshwater fish.
Nice that you think it looks mean, since that's one important point for a combat craft. :)
I've actually modeled it, because the kids at school asked for a quick modeling and UV-in demonstration. But I haven't really nailed the proportions and shape I was going for, so I will remodel it. Or not, if one of the kids make one really good texture for it, since I gave that as an assignment to them. 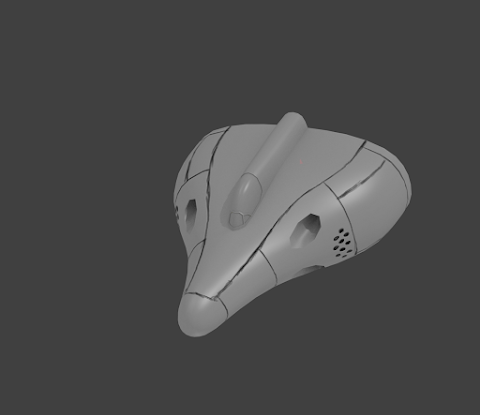 Also I was playing around with the DSMiner. For me that's the last ship that needs proper fixing/redoing, because it looks very random right now. So I made some blocked sketches.
Funny, you ware thinking about Haber craft today too. :D 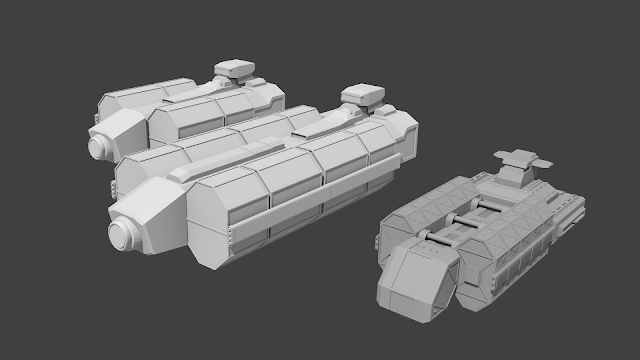 .
And a standard containered version: 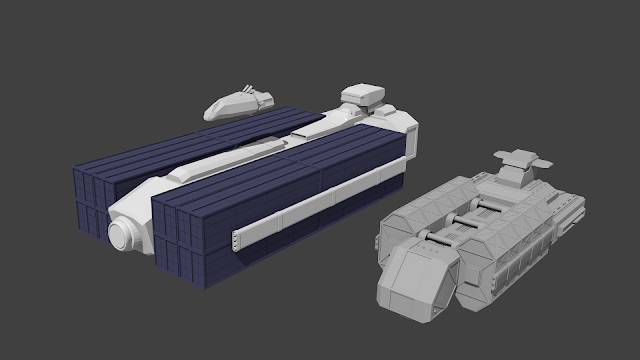 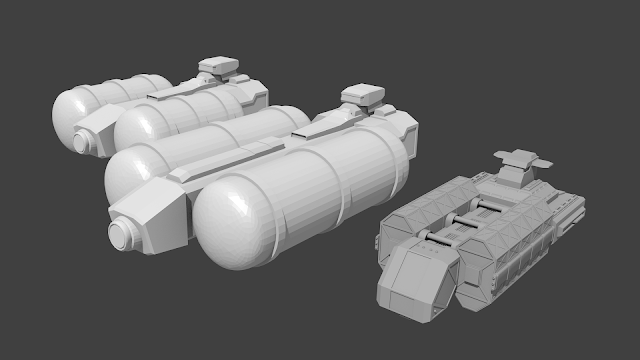