And some quick Kaluri doodles, for a more recent line of small transport/heavy courier vessels, a smaller and larger one, both larger than the Pumpkinseed. 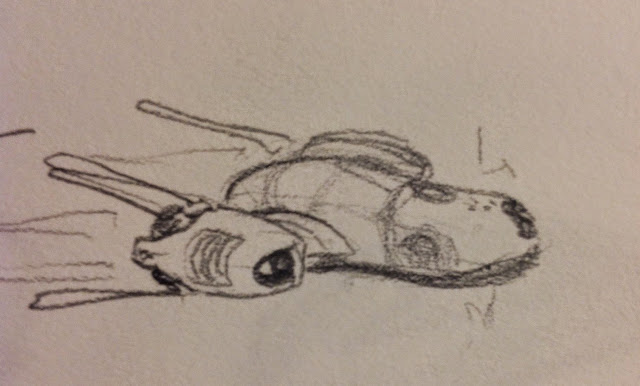 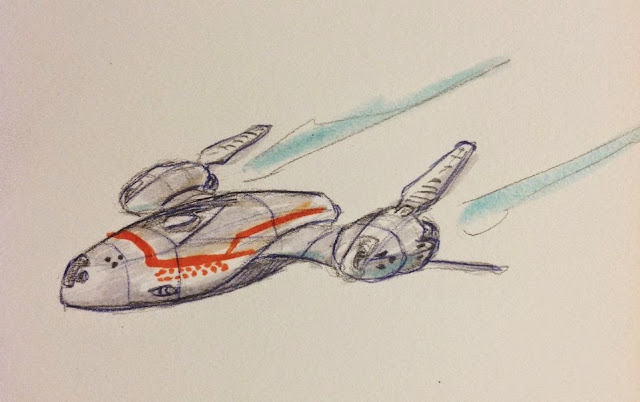 The basic layout is quite an imperial courier lookalike, but that's not intentional, but just due to the good old longish fuselage+nacelles on winglets at the end general setup.
Top

You could probably re-use those bodies and engines for different configurations too.

Lower the nacelles and put a 3rd on top for more power versions for example. Or rotate and duplicate them for an x-wing like 4 nacelle variant.
Top

A quick sketch of a Haber DeepSpaceTransport. About two times longer than the DSMiner

And I want to rework the DeepSpaceMiner to something similar in size to this, another variant, with mining equipment and stuff:

Looks like you're settling on a common block at the end with variations in the middle and front :)
Good way of getting reusable elements for the ships.
Top

nozmajner wrote:And some quick Kaluri doodles, for a more recent line of small transport/heavy courier vessels, a smaller and larger one, both larger than the Pumpkinseed.

The basic layout is quite an imperial courier lookalike, but that's not intentional, but just due to the good old longish fuselage+nacelles on winglets at the end general setup.

I'd say it looks more like an idea for smaller (not bigger) Kaluri ship, with engines mounted in external nacelles to conserve the minimal amount of space available in the fuselage.
Could be made into a highly maneuverable light fighter somewhat resembling a B5 Starfury i terms of layout or Homeworld's Taiidan Defender (except blobby and with engines rather than guns in external nacelles) in terms of overall shape.
Top

I have been keeping a loose eye on the really nice work noz is doing on the LongNose and decided to give my work related RSI a rest for the evening. I dusted off (quite literally) my old high school art pencils and roughed out an idea that has been floating around my head the last few months.

Its not totally original (it looks a lot more A-wingy then I would have liked) and some of the proportions are off but it gives a reasonable idea of what I set out to achieve. Not sure it fits in the overall style of Pioneer but might be useful for inspiration :) 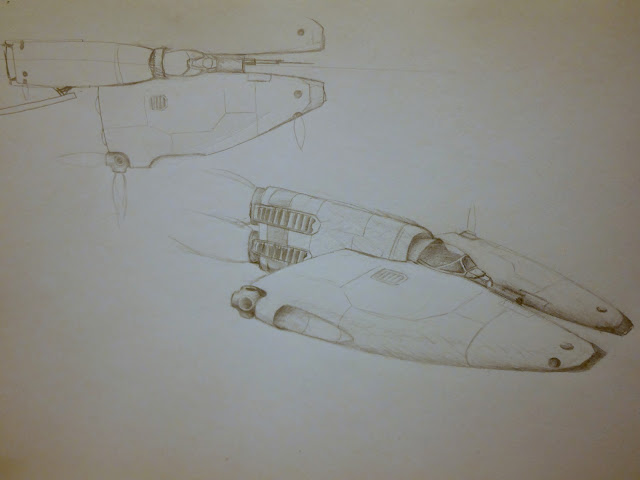 p.s. I haven't forgotten about the Bluenose - that project requires a little more time than this took!
Last edited by bobtheterrible on Fri Jul 17, 2015 8:09 pm, edited 2 times in total.
Top

Looks very nice, but it's a bit little. I mean the image. Could you link a bigger one?
Top

I think it looks very nice. It makes me think about the Dralthi.

However, I wonder what the motivation is for the wing-like things? Can that be used as cargo space?
Top

Could you link a bigger one


I wonder what the motivation is for the wing-like things? Can that be used as cargo space?

That was the intention - Fuel cells (protruding slightly from the rear) and cargo.
The shape would also facilitate atmo landings... something I didnt think about with the Bluenose :)
Over under engines with one air breathable al la Skylon.
Retractable heat sinks - if only to look pretty
Air lock underneath.

Like I said the proportions are a little off - the cockpit is a little too large making the ship seem smaller than intended. The 'Wings' were also intended to be a bit fatter towards the root to accommodate a little bit of living space and or storage.

It was just an idea in my head :)
Top

Yeah, it looks quite nice. The form is interesting and provides nice silhouette both from the side and top views. And one thing that's important to me: it firstly creates interest with that overall shape, not the details.

I could imagine this as a light Kaluri combat ship easily. Flowing shapes, some abrupt changes, smooth big cockpit, finned heatsinks.
I think the scale is almost right for a light combat craft. The cockpit could benefit from some shrinking as you said, but I'd leave out that living area you mentioned and make it into a proper fighter.

The wing-like things could work as both propellant tanks and instrument and weapons housing. They provide quite a large target from certain directions though, but they make up for it somewhat, because it's quite thin from the side and front.

One thing I'm missing is missile tubes or something similar.

I'd try it with additional more traditional heat sinks complementing the existing ones. 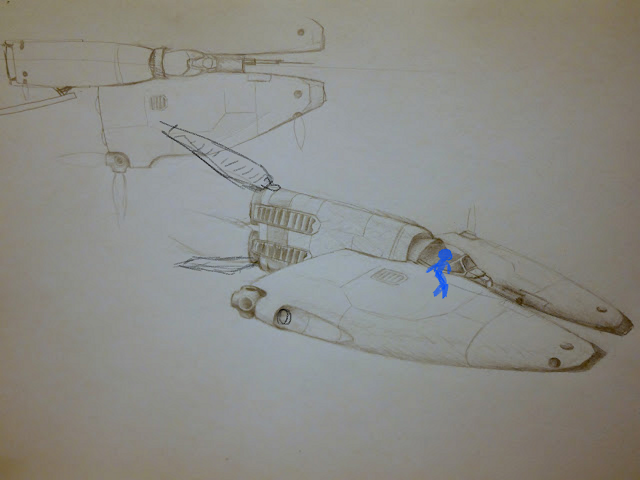 Either this way, or putting them on back of the wings.

Also I've included a little guy for the scale I'm perceiving. It implies at least the same amount of that thin fuselage on the bottom for me.
One approach that could also work: Rip the engines from the back and put them on the end of the wings, along with heat-sink fins, somewhat like on the Pumpkinseed. That could provide room for a docking collar on the back, or even a backwards firing turret mount.

It resembles that Drlathi, and the A-wing a bit, but not in a way that feels a ripoff. Actually this kind of setup is somewhat common in SF games. (E:D Viper mkiii (somewhat),Condor Fighter and Vulture comes to mind for example.)
Top
Post Reply
122 posts