As usual, any comments are welcome! The system has been fully tested and should work without problems by downloading the spiffor_systems.zip modfile to your \pioneer\mods folder.

No wiki screenshots this time, as the system is pretty generic (but it's now populated so it will appear on the BBS;)

Bodies' names are generic, as the federal bureaucracy did not care to name them
Stations' names are made up, and I checked on the Internet they weren't already claimed

Long description:
To the average citizen in the Federation, war either belongs to ancient times, or to the barbaric systems on the rim of civilization. Five centuries have passed since the last major conflict, and the cold war between the Federation and the Commonwealth has always remained cold, even during the climax of the Pell incident in 3012.
The SolFed Military, however, considers war as a serious possibility. Its fleets are frequently deployed for peacekeeping operations in independent systems waging civil wars. And the hypothesis of an open conflict with another major power -be it CIW, Haber, or a younger faction- is not ruled out.
Located on the border between the SolFed and CIW, Fomalhaut is an important military outpost. Form here, the staff headquarters could quickly dispatch the 5th, 6th and 7th fleet, either to reinforce a Federal system under attack, or to strike deeply in enemy territory.
In order to hamper foreign intelligence activity, the Federation strictly restricts and monitors any civilian activity. Only two civilian stations are authorized in the system, as they offer recreation for the troops on leave.
Operated by corporations, the "Red Cloud" aims to attract rank-and-file soldiers, while the "Ambrosia Chateau" appeals to officers. But no matter low cost or premium, the services are unsurprising: gambling, red light districts, restaurants and performances.
These stations -being open to travellers- are the only structures appearing on public maps. But they suffer from a bad reputation: many tourists comment about how troops are being ripped off of their pay with overpriced and tacky entertainment. Moreover, despite the faux mood of freedom and even wild abandon, most visitors cannot shake off a feeling of being constantly watched.
Top

Spiffor wrote:I like your story :) I would have to tweak a little with the lua file to have a significantly stronger gravity than Earth's: my massive terrestrial planets are usually proportionally larger than Earth, and I end up with a gravity of 1G

Well, the astronomical data suggests the planet is "twice the size of earth" (so double radius? or double mass?), and 42 day period. Either way, it shouldn't be hard to calculate what a reasonable surface gravity could be, assuming similar density as Earth.

Reading the actual article on motherboard now (and phys), some nice info there, like this could make for nice mention, if you add Vulcan to 40 Eridani A:

“An intelligent civilization could have evolved over the aeons on a planet circling 40 Eridani,” Roddenberry and the astronomers suggested in a 1991 letter to the editor published in Sky & Telescope. The 40 Eridani star system is composed of three stars. Vulcan orbits the primary star, and the two companion stars "would gleam brilliantly in the Vulcan sky," they wrote in their 1991 letter.

Like: "planet is known for it's exotic sky, at times hosting up to three suns" (so far, we keep alien intelligence out of pioneer). Also, a station, or location there could be named "Sarek" after the national park in Sweden. It is of course a mere coincidence that it is also the name of Spock's father... (Using the name "Spock" directly is too obvious, and also maybe not entirely OK from copyright stand point).

SWEET! A military system! and putting Fomalhaut back on the map!

(I divided my reply in two posts, this being the second part, addressing your last post)


Spiffor wrote:and the cold war between the Federation and the Commonwealth has always remained cold, even during the climax of the Pell incident in 3012.


impaktor wrote:and the war between the Federation and the Commonwealth has since remained cold, even during the climax of the Pell incident in 3012.

For this, I have not any written suggestion, I just got some inspiration, so thinking out loudly:

Spiffor wrote:The SolFed Military, however, considers war as a serious possibility. Its fleets are frequently deployed for peacekeeping operations in independent systems waging civil wars. And the hypothesis of an open conflict with another major power -be it CIW, Haber, or a younger faction- is not ruled out.

one could do something alluding to SolFed's view on use of force, like something along the line with "SolFed Military is merely seen as the executive branch of the Ministry of foreign affairs", or something with "SolFed's military is a seamless extension of its foreign politics", or "the military enables SolFed to engage in 'battleship diplomacy'" or "the best diplomat is a fully armed starship" (assuming it fits with the lore). I'll let you think on that. (I assume CIW will also be packing a military).

Spiffor wrote:Only two civilian stations are authorized in the system

impaktor wrote:Only two civilian stations have yet been authorized in the system

...or it sounds to me like stations could be mobile between systems.


Initially, when reading the first half of below sentence, I did not quite understand that "Red Cloud" and the "corporations" referred to space stations, I suggest the following changes:

Spiffor wrote:Only two civilian stations are authorized in the system, as they offer recreation for the troops on leave.
[RET]
Operated by corporations,

to (i.e. move last sentence of previous paragraph to opening "topic sentence" of the paragraph below it, which I show with the "[RET]"-thingy):

Spiffor wrote:[RET] Only two civilian stations are authorized in the system, as they offer recreation for the troops on leave. Both are being operated by corporations,

(here omitting previous suggested potential change of "have yet been authorized", as point is the second meaning)

- "But no matter if low cost or premium"

"most visitors cannot shake off a feeling of being constantly watched.", I'd prefer to be a bit weaker / less specific by changing to "many visitors"? Or even just "some visitors"? maybe that's more eerie? I.e. only "some" notice it, since the others are blinded by booze, women, and money.

I hope you don't mind me nitpicking apart what you write. I'm the kind of person who re-writes everything I do, infinite times until deadline hits. I think you're doing great work!

What you're doing is hard manual labor that really infuses life, lore, history and personality into our galaxy, and this is stuff no procedural algorithm can do for us, so please keep up the good work. I'm looking forward to seeing what system you have next lined up!
Top

Thanks very much for your input Impaktor

I don't mind your comments at all, on the contrary, they're improving the text and lore :) Thanks very much

Ops, was merged. I took the liberty of adding my smaller suggestions to it, post-merge:
https://github.com/pioneerspacesim/pion ... 20999f00aa

By the way, the " the barbaric systems on the rim of civilization" sentence, makes me think of the "Spinward marches" in traveller, which I like. I'd love it if Pioneer could have named regions/sectors of space, with sertain characteristics.
Top

Thanks impaktor for the new commit. I had a bit of a rush this week IRL so I couldn't integrate your suggestions, but they're really all good

impaktor wrote:Well, the astronomical data suggests the planet is "twice the size of earth" (so double radius? or double mass?), and 42 day period. Either way, it shouldn't be hard to calculate what a reasonable surface gravity could be, assuming similar density as Earth.

Come to think of it, twice the radius means twice the gravity, as gravity increases linearly with radius. Also, there could be evolutionary selection, or genetic engineering for the native population to adapt to the planet.

(Clifford D. Siamak's book "City" deals with genetic engineering of humans to better adapt to living in/on Jupiter, and Frederick Pohl's "Man plus" about a astronaut who get's his whole body re-built to be well adapted to Mars.)
Top 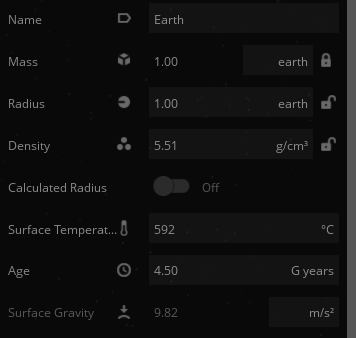 Doubling both the mass and radius actually halves the gravity, since you double the mass, but increase the volume 8 times, so decrease density: 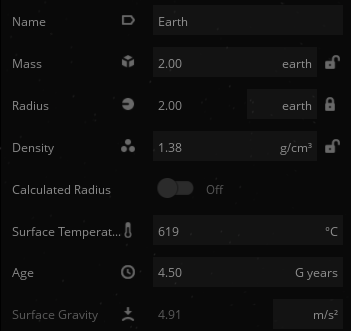 If you keep the density, and increase the radius by two, it will push the mass to 8 times, and gravity goes up to about 2g : 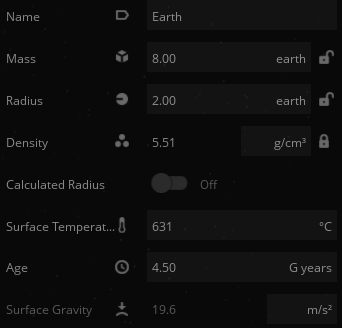 Doubling the mass and keeping the density will give a bit of an increase in radius, and in gravity: 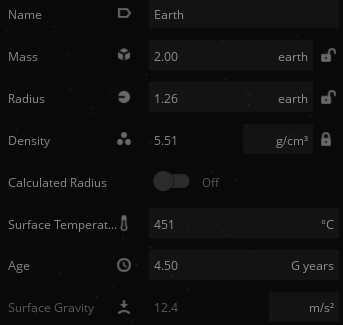 At least if the calculations are right, but in theory they should be.
Oddly enough the surface temperature got way over comfortable in all cases, I guess because I changed the mass and radius a couple of times, and that calculation took those mass changes to heart, and warmed the thing a lot when I accidentally gave it a huge density and small size.
Top

As usual, any comments are welcome! The system has been fully tested and should work without problems by downloading the spiffor_systems.zip modfile to your \pioneer\mods folder.

Long description:
One of the first systems settled by mankind, Sirius was founded in 2328 when colony ship "Ibn Battuta" landed on Planet Antar.
Antar is not an outdoor world per se, as humans and earthling crops cannot breathe its atmosphere. Yet, its mild pressure and temperature makes it easy to build structures with life support. As such, the Sirians live solely in cities: they are, and have always been, a urban civilization.
A Sirian city is typically built around an abundant source of liquid water -"oases"- and hosts a wide range of activities, from hydroponic farming to high tech industry. A city's growth is limited by the water resource, and new cities end up being founded on other oases. As a result, Sirius is dotted with city-states.
These city-states have never been united by a strong government. The very loose "Sirius confederacy" merely host the talks between mayors and ensures no rogue city breaks the few consensual rules that shape Sirius' identity: open trade, no armed agression, no nosy bureaucracy interfering with the city-states' business.
After the War of Hope, the confederacy's role extended to represent Sirius in diplomatic dealings with foreign systems. Forced to choose a side, the Sirians favoured the one which seemed to offer the best opportunities. As a co-founder of the Commonwealth and making up one of its economic powerhouses, Sirius was and still is highly influential: its efforts have been instrumental for the current detente between the two superpowers.
While they barely ever waged war during their many centuries old history, the Sirians did wage fierce economic competition among themselves. Great riches have been amassed, yet they are highly concentrated in the hands of a few cities and corporations.
The lack of cooperation explains why this wealthy system never terraformed planet Antar despite its potential. Travellers not only awe at the sight of Sirius' extravagant monuments, but also at the thought they are located right next to the direst of slums.
Last edited by Spiffor on Tue Oct 02, 2018 5:20 pm, edited 1 time in total.
Top

I have only a few comments for this one:

Maybe:
- "their centuries-old" --> "their one century old" or: "their many centuries old"