Quite rough around the edges though, UV-s are only auto-unwraps, texture is a simple AO bake, and the material is shadeless for now. 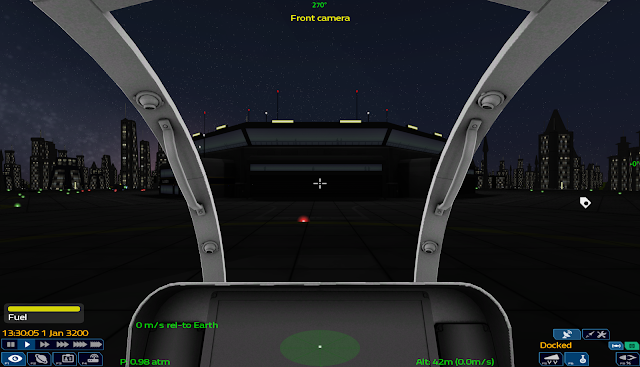 Ah, man, that radar would look really good if it was in the "computer monitor" of the cockpit. :)

I tried installing it as a mod, but it still shows the old model. IS there anything special I need to do to get this to work?
Top

Oh, yes I totally forgot about that. Sorry. You need to go in the pioneer/data/models/misc/defualt_cockpit/dir and delete the default_cockpit.sgm, because sgm files are loaded when present.
Top

That's a big improvement, even in it's current state, over the current default cockpit :)
Top

This is going to show my ignorance - but how is the 3D cockpit (with different views in "screens", etc.) going to go together with the current HUD? Is this the "New-UI" that keeps popping up as topic? Or is this a "mask" layer behind whatever HUD is displayed? I have tried the cockpit in the game (and it is cool) - but am not sure about the ultimate goal yet?
Top

The "new-ui" is what you see when you are docked with a station and buy goods, trade ships, pay fines etc. Which is all defined and controlled from Lua scripts.
The "old-ui" is the system-info, in flight communications / autopilot, etc. Which is all hardcoded in C++ and absolutely horrible to maintain.

A 3D Cockpit would have information displayed on those screens like the scanner, altitude, your new lat/lon text, possibly along with other views from the ship like behind or below (for landing).
So most of the HUD would go away and become things rendered in the cockpit screens - ideally.

For HUD elements I would like everything to become embedded in the cockpit or presented as some kind of "Augmented Reality" in the game itself, as 3D elements so that there isn't really a 2D "HUD" anymore unless it's one drawn within the 3D game world.
Same with the UI screens we currently have, they would be rendered onto a texture and displayed within the 3D game itself but still controlled by the mouse and their usability remains the same.
Top

I'm 100% on board with drawing everything "in the cockpit", like in Elite Dangerous. (and on the inside of the glass of the cockpit?)

Also, when viewing the BBS for instance, we would see it through the onboard computer, thus drawing a litte bit of monitor edges perhaps?

Then if I'm to go crazy: add scanlines on all the monitors, and make the entire universe anno 3200 seem like 1989! Ha, but I bet nozmajner would hate that, and most others as well. :)

(Hm, or scanlines on just the monitors of the low end ships?)
Top

(Hm, or scanlines on just the monitors of the low end ships?)

Now that would be absolutely hilarious! I love it! :)
Top

Little bit of an update for the default cocpit:
Outside
Pilot's view
(sorry, google photos isn't really giving any means of embeding it seems, and picasa is going out)

I tried to push it towards a more minimalistic approach, compared to the last state. I ditched the central console with the monitor, figuring most stuff can go on the screens around. Gives better visibility this way. This change really came naturally when I started to play with the seat position, because the common aircraft configuration was bugging me quite a bit. So I tried something similar to what the Soyuz has It feels better and more plausible this way, since you don't have to reach up for the flight controls (up is along the thrust vector after all).
Thetwo upper little panels on the sides will have touchscreens, the lower ones will have buttons, switches and whatnot.
Top
Post Reply
60 posts