robn
Posts: 300
Joined: Mon Jul 01, 2013 1:11 am
Location: Melbourne, Australia
[phpBB Debug] PHP Warning: in file [ROOT]/vendor/twig/twig/lib/Twig/Extension/Core.php on line 1266: count(): Parameter must be an array or an object that implements Countable

Yeah, I don't think the attribution is a problem. Might be if we start to shuffle code around, but mostly I'm happy with just keeping it at the file level. Really it doesn't matter anyway - we have so many copyright holders that its impossible to disentangle individual components, which is kind of the point - its really easy to say "nah, can't change the license" :)

I'll post about the cockpit rewrite in the other thread.
Top

My thoughts for a rewrite are just to make it work more like the new shields or the gun demo Luomu did.
I.e. Add cockpits directly into the models scenegraph and then render pretty much as normal.
No need for messing around with frame etc.

The cockpit management would just be doing the initial attachment of cockpit to model and the subsequent updating of it within the scenegraph.
Top

I alos fell in the typed, but lost it pit. I wanted to post my notes and self-murmur about this. The asset-creation aspect mosty, and I want to track my progress roughly.

I'm right now working on the default, to make it release ready. Mostly material and lighting work, and I'm going to replace the contents of the screens to something bogus but good looking data, that doesn't imply direct ingame functionality for now.
A question: that alpha-test material property makes use of the alpha channel right? Or I can only use a flat transparency?

I've already tried out some techiques to make working with prefabs easier, mostly with UV-s and materials. I still have some ideas I want to try, but it's promising already. I'm positive that I will be able to provide properly UV-d and textured prefabs, and the modeller will only need to juggle a bit with the UV layout to be able to bake in the texturing and lighting, even for glow maps and spec maps. (I want to make some fore ship creation too in the future, like heat sinks, landing gears, etc, but that's another story.
I also want to try some curve and array techniques for broader geometry creation.

I was doing research also, mostly on aircraft cockpits, and I have a bunch of drawings too. I also checked the view from some of the ships, and they will look rather nice in my opinion. Kaluri ships will have quite clear views, the OPLI ones not soo much, but I like that as a way to hint ship quality.
Top

I think this version of the default cockpit is good to go.
It has a transparent shell to indicate the big faceted screen. 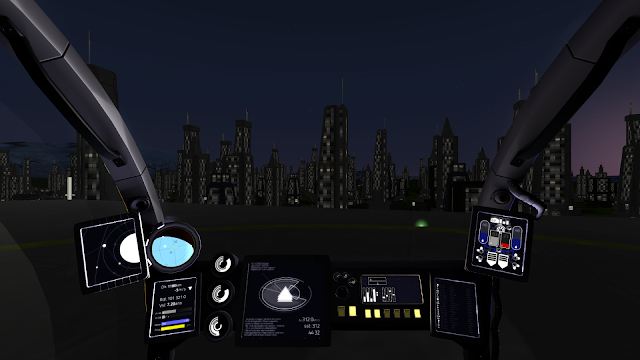 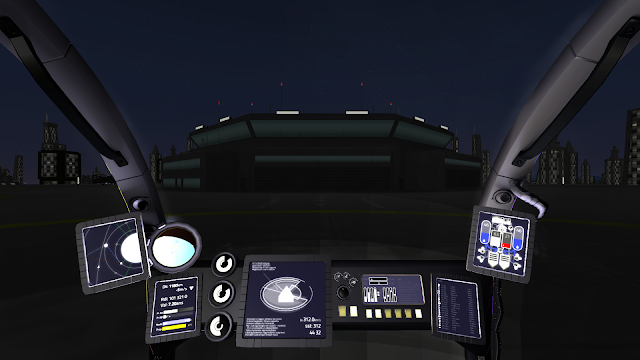 Although it is nice, I do not find the logic of distributing something that is just a pretty picture of a long-term promise.
Why not focus efforts on improving existing board instruments, and even make different dashboards for each type of ship. There is plenty of room there for what we really need without invading the vision.
Top

I remember the first time I changed my ship, nothing happened internally. Like when I change my car, I expect to see some difference in the dashboard, although minimal.
Top

@walterar, It's about researching the look and feel, trying to decide what layout looks good for Pioneer.
Also this is the "default" cockpit, there aren't any custom cockpits yet so yes everything is going to look the same for now :)
Top

Just one heads-up: Not everyone is playing with the default field-of-view setting and the cockpit seems to be affected by the FOV. On one hand, this is kind of logical physically, on the other hand it cuts off parts of the cockpit when using a lower-than-default FOV and thus is not so nice game-wise.

One other issue: I don't really like this strange asynchronous turning of cockpit and the rest of the view. I guess it's supposed to emulate moving your head, but it's getting on my nerves. BTW, it also happens, when changing frames (e.g. when leaving the rotating frame of a body).
Top

robn
Posts: 300
Joined: Mon Jul 01, 2013 1:11 am
Location: Melbourne, Australia
[phpBB Debug] PHP Warning: in file [ROOT]/vendor/twig/twig/lib/Twig/Extension/Core.php on line 1266: count(): Parameter must be an array or an object that implements Countable

I'm inclined to remove the headlook thing entirely for now, and think about adding it back later if we decide to experiment with it.
Top

Most aircraft in flightgear that have extremely detailed models with switches and buttons and you have to handle all of this to start it up, have a menu entry saying "Autostart". It automatically puts the aircraft into a flight-ready state.
I like the concept of being able to do everything as realistic and complex as possible while also allowing people to use the simple way to do it.
Top
Post Reply [phpBB Debug] PHP Warning: in file [ROOT]/vendor/twig/twig/lib/Twig/Extension/Core.php on line 1266: count(): Parameter must be an array or an object that implements Countable