Just because nothing on this project is ever forgotten :)

Yeah, I was playing around with it, and I'm liking it mostly, although the HUD feels a bit disconnected to me in for some reason, especially compared to the other things in the cockpit.
Top

Pressure me about those cockpits for sure :D.
Side question: how hard it would be to implement the render to texture monitor which would show the image of the directional cameras, and a keyboard shortcut to cycle the views? I'm asking because the OPLI ships will have a quite low visibility, and I'd rather avoid faking it with a hole as a monitor.

Last time I touched the new default cockpit model, I was working on the flight sticks. Next time I will do the dashboard stuff I think, like monitor frames. I already have a bunch of switches and knobs.
Top

Just to be clear: You want to render other cameras(/views) onto textures and show them in the cockpit on monitors?

Sure it can be done, there's a couple of minor bits to fix up to enable it but I think most of the structure is there already and what isn't I've written before for other branches that never made it to PR status.

I don't think that's quite what you mean though is it? You mean like the current default cockpit with it's fake-wrap-around-monitors-view, only they'd be textures in this case of the real scene?

I'll need to think about it a little bit, when my brain hurts less.
Top

Yes, I imagined it to a monitor. The monitor would show one view at a time, and you can switch the view on the monitor, just like you would switch the actual view. Like a preliminary MFD screen, but only with viewport functionality for now.
Top

A bit of an update on the default cockpit remodel progress:
Slightly looking down, and the FOV is a bit bigger than Pioneers. 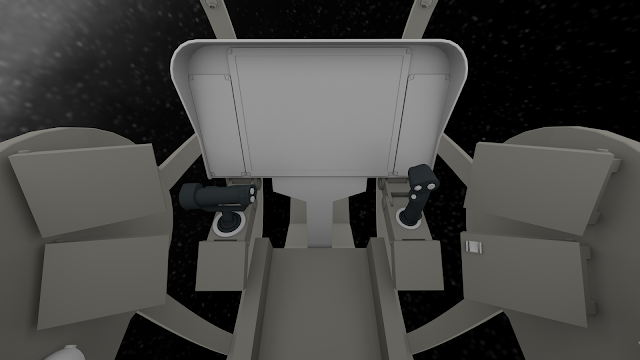 Somehow the FOV currently used aught to be propperly shown on the scanner. (The whole scanner needs some love. Like so many other parts of Pioneer).

Anyway, looks very nice. Would be awesome if the player could have like the scanner on one screen, back camera view on another, and Auto-pilot destinations on another, etc.

Will you put a dude (dudess) in the chair as well, so I can look at my legs and arms? (I guess this opens up an enormous pit of work, if the dude is to look alive, and actually move his/her arms.)
Top

I'm not planning on including a dude(tte) right now, right because what you are saying. It would be a very huge amount of work to do it right. Especially since it would need bone deformation implemented, and it might even need some kind of Inverse Kinematics for the hands on the sticks.
Maybe when the head rotation limits are implemented, so the camera won't intersect/show a half mesh, I'll include legs and lower body, so the seat isn't that empty.
Top

That looks very nice, do you have a mod we can drop in and try?
Top
Post Reply
60 posts