I guess we should promote this upto a feature request on the issues list (GitHub).

Best to do it in parts though so let think through what those need to be:
* particle system,
* destroyed ships system - including new ship state,
* damage system to disable/destroy equipment and components.

That's (at least) 3 separate features, two of which will require artist input I think.
Top

That's (at least) 3 separate features, two of which will require artist input I think.

Would this mean some new collission meshes for parts, comlementing the hull collision, or they would replace it completely?
I've already played with simple meshes for the parts of the mola-mola, and it wasn't too difficult to place them: 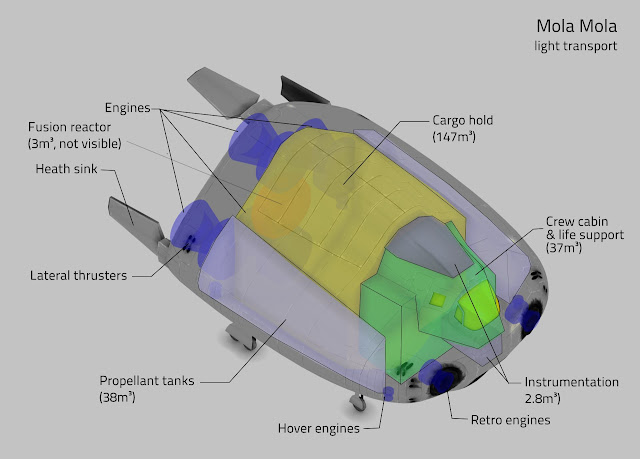 How visible the damage on parts would be? Some nice damaged part models could be made, but it will be quite a lot of work. Especially because we would need to separate areas of each mesh if we want to make them blastable form the model, and they,would also need to be damaged, either by modeling damaged versions or doing it procedurally somehow.
The main question is that would this worth the effort? Since Pioneer is not exlusivelly a combat oriented game, overduing the damage model might be an overshot, and energy and effort might be more useful in other areas. (Saying this while I'm ppractically neglecting another huge area because of lack of time, the cockpits, which we decided to work on...)

I don't have much experience with particles, so I can't say much about that. If I have some time, I'm sure I can learn it though :)
Top

From my point of view, it seems a bit overkill to do one crashed-model for each ship. Initially we could just have one for all ships (basically some unrecognizable shape), or slightly more ambitious one for each ship class?
Top

It might just be enough to splat a bunch of burn mark decals onto a ship, turn off any and all lights and then emit from smoke/gas from the thrusters whilst letting it drift, tumble and spin...
Top

Marcel
Posts: 48
Joined: Thu Aug 01, 2013 2:39 am
[phpBB Debug] PHP Warning: in file [ROOT]/vendor/twig/twig/lib/Twig/Extension/Core.php on line 1266: count(): Parameter must be an array or an object that implements Countable

While a model for each damaged componet seems excessive, I remember the particle trail that streamed from a damaged ship in FE2. When I damaged an enemy it was like tasting first blood. Because the AI wouldn't let them quit, I've seen ships that were a ball of fire still trying to attack. The idea of damaging specific components of a ship is an exellent one, I think. As an example, your port lateral thrusters could be damaged (become less efficient) or destroyed. You'ld have to set up the areas to be damaged as in the Mola Mola example. A blast decal and a particle stream should be sufficient to indicate the damage.
Top

I think each ship should have its individual wreckage, but it should either use modified original mesh (some holes, dents and missing parts), or unaltered one with damage shown using texture (decals - with bumpmaps, maybe overall retexture with signs of damage and some see through holes (alpha = 0), warm, incandescent glow of slagged parts inside, no lights and so on.
Particles representing leaking gasses would be neat, but they should be emitted in straight lines out relative to the wreckage - I think Pioneer should always first try realistic aesthetics, the embellished realistic, and only then, when both approaches fail go on to try something else.

Wreckage may be either ship's state or newly generated object inheriting ship's position and orientation, as well as velocity and rotation rate (with some randomized adjustements to send it tumbling).
Depending on what we want to potentially do with it, it may also need to inherit such stuff as equipment, cargo (not if we can have it spill on destruction, but then model will need to reflect that) and registration.

Ship damage may just use decals and particles (I'd go with jets of particles that only start trailing when the ship is in the atmosphere - of course if the ship accelerates they will also appear to be swept back) for hull and components that don't have externally visible models. Thrusters could start leaking some gas and glow reddish-orange inside without being capable of firing. It might be nice if one of possible effects of visible leaks of any kinds was slow loss of propellant and very faint thrust created by escaping gas. Externally visible equipment could either get complete damage meshes, just damage skins or disappear after having protruding part shot off.
Top

The problem with everything having it's own model/textures for a damaged version is that right now we only have one modeller.
So most of the time we're trying to lighten the load on creating art rather than add too it.
Top

Regarding debris - I think that the most important and easiest part would be spawning a number of randomly tumbling quads dispersing from explosion location, textured with a number of skins representing torn hull fragments (so flat, damaged piece of metal with jagged edges).


FluffyFreak wrote:The problem with everything having it's own model/textures for a damaged version is that right now we only have one modeller.
So most of the time we're trying to lighten the load on creating art rather than add too it.

I think it should be easy to both lighten the load here and allow for future improvements.

First, how doable would adding damage decals to Pioneer - dynamic, based on actual hit location or random?

By default the wreckage could use the same model as original ship, with the same skin (minus all glows), but covered with damage decals - preferably bumpmapped and with glows of their own to represent slagged internal components like drive (at least for actual wreckage decals, functioning ships could use non-glowy decals instead).

Further improvements could be done by reskinning the wreck with damage skins (based on original skin, which should be much less work than texturing the entire ship) or modifying the existing model to serve as wreckage (again should be easier than doing whole model from scratch) and reskinning it.

Ideal solution would be some sort of hierarchical model that could have parts blown off, or so I figure, but we don't need to be ideal here, at least not right away.
Top
Post Reply [phpBB Debug] PHP Warning: in file [ROOT]/vendor/twig/twig/lib/Twig/Extension/Core.php on line 1266: count(): Parameter must be an array or an object that implements Countable