Well that was hilariously difficult and error prone but I now have encoded and packed normal, specular and AO maps, plus diffuse + it's greyscale version (for trying to sort the triplanar blending).

Think I will calculate the slope/height values next and then try some simple blending between the two texture sets based on the slope.
Top

Oh I wouldn't worry about that, real life is too important.

If you do want to get out of a rut or you're feeling a little less than productive though then I recommend just hacking stuff together, ignoring all the details and just trying stuff out.
Quite often I throw stuff away entirely and never use it - it's purpose is just to show me how stuff might work. Other times I'll make something new based on the same ideas, lifting bits wherever I can from that prototype.

Mostly you guys only get to see the finished code ;)
Top

impaktor wrote:I'll see if I can add a rockyworld with correct parameter for Halley's comet (in the coming days)

Here are the parameters for Halley's commet, from wikipedia.

(EDIT: never mind the radius, I was off by a factor ten, when taking the screen shot.)

I guess we will want a way to have them filtered from the System Info / view displays or change how they're shown.
Top

Uploaded some new screenshots of the asteroid using a test seed to create it the same way every time.
This has let me optimise the generation a bit but it's probably not going to be something we can afford to do in the main thread so integrating it with the engine proper will be interesting. 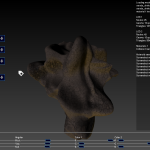 I took 3 screenshots using each of the lighting options in the modelviewer where I have been testing it.

I've got some work to do exposing the controls for the texturing and stuff before it's ready for tinkering but getting closer now.

Recent progress has been adding a domain warped noise which is blended with the vertical surfaces so you get jagged slopes and smooth flat areas.
This wasn't high enough resolution so I switched to using 32-bit indices during the generation of the icosahedron meshes.
This wouldn't work elsewhere in the game or for rendering but after welding of duplicate vertices it reduces the number of vertices to less than 65536 which means I can then convert the indices back into Uint16.
That gives me an extra two levels of subdivision compared to the usual Drawables::Sphere class and a high enough resolution mesh to work with, a neat trick anyway.

There was some experimenting with blending but I've not yet taken a serious look at it.

Collision and integration with the engine proper still needs works but I have done some hacking to experiment with generating the collision information, this leads me to believe that I will need to properly integrate the generated asteroid with the scenegraph rendering system.
In hindsight that's a really obvious idea/statement but it's surprising how long good ideas take to penetrate my mind!

Currently, and in part because of the scenegraph realisation, I am working on a system to easily generate LODs.
Which means that the current order of tasks for the asteroid visuals / collision is something like: Something I haven't really touched upon so far is the configuration of the asteroid themselves, as in how we control their appearance beyond just using a random bunch of deformations from a seed value.
There are currently a number of things that can be changed, for example: ...there's others but I can't look at the code right now so can't recall them all :) but there are handles to pull which control various parts of it and lead to either smooth round asteroids or jagged nightmarish tangles.
None of these are exposed yet, nor do they have any guidance for setting their values.

This is all before we start on actually placing them in the game world.

I was hoping that someone might find that interesting, writing the location/information generation stuff for asteroids belts, rings, Trojans and loose wandering bodies etc :/ oh well, I'll just have to get around to it after the rest.

As ever other developers are of course blowing away absolutely all of my very best efforts ;)

Those Enemy Starfigher ones are very nice, but they seem to be hand sculpted.
Top

Since we were talking about texture and details of asteroids:
Rosetta catches its own shadow
"The highest resolution image yet taken of Comet 67P by the Rosetta satellite has just been released."
Top

nozmajner wrote:Those Enemy Starfigher ones are very nice, but they seem to be hand sculpted.

That is an option too, I don't see us having a single procedural generator to cover all situations.

Having a set of asteroids models that we can apply a variety of textures too might be another useful way of producing them.
Perhaps we could "splat" some decals on or customise the geometry in some circumstances too.

This has all been a valuable learning exercise for me and I'm quite far along, almost able to use it in the game itself but progress has slowed lately due to work and real-life!

Hopefully I'll be able to get back too it soon.