I've been going through old posts, and though this one needs a bump.

@Nyankosensei of what I've seen, it looks really nice. Hope you return to the model some day when time/motivation permits.
Top

Hi!
I have started working on new model of Auronox Tide based on first, below sketches by nozmajner: 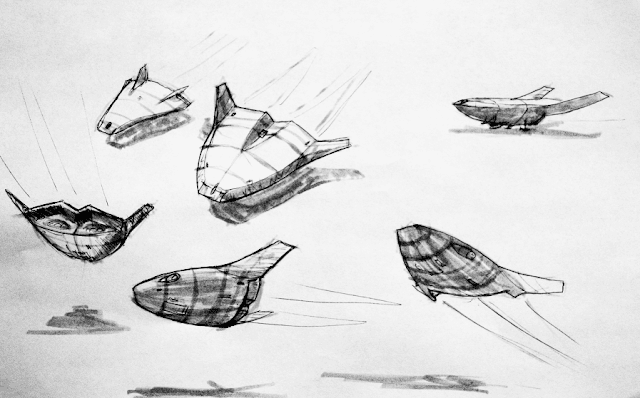 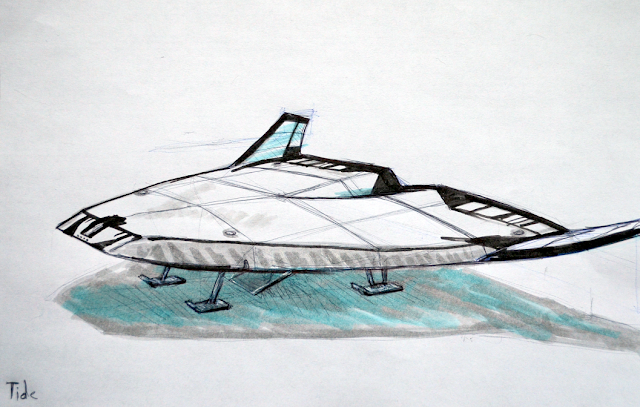 I already have something which I can call base shape for further sculpting the mesh, but I am not going to show it until I decide it is worth presenting or necessary for feedback. ;) If I will have enough free time I should be able to make first, early preview of the model this weekend.

Once again hello everybody!
Top

Welcome on board! I'm curious how your model will turn out.
Top

Posting this a little bit earlier because I think it is time to get some feedback.

So far I've only made base shape without wings. Last day I've spend updating curves and adding extra edges, it is not perfect but I think it does the job. I've always had problems making perfect curves in 3d models.

Do you think I should edit anything in the main shape before I progress forward?

Web preview of the model: https://p3d.in/hckxp

edit2: I am also thinking about editing rear as it is in the sketches, noticed just now that I made it differently. Let me know if I should change rear to more straight version instead of curvy. The reason I made it curvy is because Wave has similar curves, only afterburner has sharp edges and I want to do it similar in Tide.

I have a question also: would it be good idea to model engine/afterburner as separate model/component with it's own texture and UV? I am thinking that it would be great to be able to buy different kind of engines/afterburners and it would have impact not only on statistics of the ship but also change visual appearance. If I am correct currently cannons are added as separate objects to the ship? Would it be possible to do the same with afterburner?
Top

I'm sure nozmajer has some cards up his sleve, and can give helful pointers for blender-usage if you come by IRC, where he often can be found.


I am thinking that it would be great to be able to buy different kind of engines/afterburners and it would have impact not only on statistics of the ship but also change visual appearance.

Main problem now is that we almost never see the ships in great detail, which is a shame. Hopefully that will change in the future.
Top

Hi, as promised I've updated the model this weekend. Not added much this time, only wings and front sensor. I have a question about the scale. I've added Your reference model nozmajner but I think Tide is still bigger in sketches. Should I slightly increase it's size or is it fine now? and the reference .blend scale: It is time to update afterburner:

Currently model has 6818 tris. Triangle count jumped drastically due to cylinder shape of afterburner and around 1000 tris because of these little radiators/string regulators, it shouldn't happen again. I am aiming for 10000 tris for this model, or 15000 in worst case.

Let me know if I should edit something when I still can. :)

edit:
edited inner part of the afterburners, removed one cylinder loop which was hard to spot anyway, that gave me back around 200+ tris. Also moved smallest holes a little bit to top because I think these were too close to bottom edge.

Last thing I forgot to mention is that model is currently mirrored, so links of verticies between biggest engines will change when I will merge mirror.
Top

Long time no update, found some time today to make top, down and side thrusters: This is how it looks from the front: http://i.imgur.com/bvnuxIm.png
Also updated p3d link: https://p3d.in/hckxp
Top