forgive my horrible drawing skills,
look at the idea, not the quality of the picture,
I have disability of hands so it is very difficult for me to hand draw and some ships set: No need to apologize :).
I think the ideas are coming trough, especially for the cargo ship.
Which shipyard, you were thinking in? A new one? If so, which faction? (Please aim for CIW or any other than SolFed, we already have too much yards from there, compared to the others.) 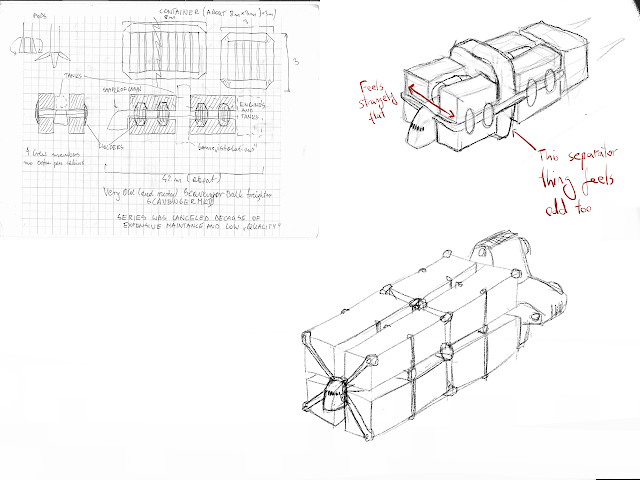 It seems a bit odd to me, that there's a large flat area for the containers. That central part wasn't really clear for me. Feels like too much excess weight compared to payload (containers).
That other ship in this drawing is an example of how I'd approach a smaller container vessel. I mostly aim for less ship, more container proportion in the name of efficiency for this kind of craft.
The low hanging cabin felt a bit odd at first, and I'm still not sure about it, but I think it could work.
42m is actually quite small for a real bulk transport, the Malabar or the DSMiner is right at that size range. You can dream much larger if you want real bulk ships. 300-500m length could be easily imaginable for those.
I like the notion of it 's being a discontinued crappy model. I'm not sure about the name Scavenger. At least I don't think I'd name a line of craft after a group of animals that eat corpses if I were the head of a shipyard. Also if it's a low quality craft, than you might want to consider Haber Corporation as manufacturer. They built the DSMiner and the Lunar Shuttle, and they don't give too much care for things like quality or ergonomics, they prefer cost minimalization as top priority. (The Lunar shuttle is being remodeled to look more like a spacecraft, there's a thread you could check out.)

The other two drawings aren't that clear.
The first one seems to be some kind of atmospheric shuttle. The thing which bugging me most are those tiny clawlike things at the rear. I think they are too much like some Bat-plane part, and I think they won't look too good in 3D. I'm not really sure if I interpreted it close to your intention in perspective.
Also those landing legs feel a bit larger then necessary.

The side curves feel a bit dull and bulged for me. I can't decide if they are wings, or hull, and it feels like it it's being squashed.
What's the purpose of this ship? Is it an atmo shuttle?

The third one felt the less clear. According to those tiny drawings, they seem like an aircraft, but the top view doesn't go along with that notion for me. And the curves aren't really interesting, and my first thought was some kind of half closed umbrella. The wing configuration isn't clear either. One of them is some kind of X-wing configuration? Id' avoid that, at least if it's going to be this pronounced.

The thing that bugged me most I think are the pointy wing endings. Those tend to look toy-like in 3D in my opinion, and lack mass. I'd suggest researching aircraft wings, blended wings and so on if you want to design winged atmo capable crafts.
And one other thing that comes to my mind for the second and third drawings. They resemble the Wave a bit, but not enough to be manufactured by the same yard, but they aren't distinct enough to justify a new yard.

Hope this helps, keep up the good work! :)
Top

wow. You are reading in my mind, second ship - especially...
ok give me a while, improve them a bit


BTW:
Names are not so important for me if You have better, only my examples (draft-versions)
Top

I am back and can resume my work here
Top

If it is actual and You like it I can continue this one. It is just draft of hull's shape
I wonder about more broad "middle"
it's much to work with it, I know. but I would like to show it before / if I will be continuing