Keep up the good work @bobtheterrible. I'm looking forward to seeing the ship in the game.
Top 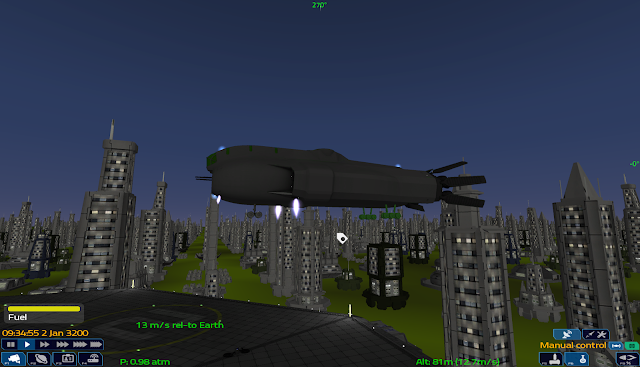 I've put it into a mod for you, and added a bunch of comments for the spaceship2.model file, shortly explaining each part. A mod is a good way to put out the ship for testing. It's a zip file, which replicates the structure of the data directory

I've just copied the shipdef file for the Storeria, only changed the model and name entry. The model points to the .model file, without extension, and you use this string to cheat yourself one in the game:

(case sensitive)
I've used temp filenames, especially since you haven't yet gave a name for it. I'm insisting on using some conventions for file naming: Apart from the patterns, these aren't mandatory, but it's more clear this way, and makes further modifying easier.
Also you can use more than one material with separate texture files if you want, but you can only have one material for each object. And they can still share the texture files, but I'd stick with the same naming convention of you use more then one texture.

Generally the ship is in a very good state. I'd consider the model file almost complete.
Have you thought about the name for it? I think it's still a good fit for the OKB Kaluri shipyard, which uses fish names. Both Pumpkinseed and the Molas (one's work in progres) got their names after sunfishes for example. I've collected a bunch of possible names for Kaluri a while ago. I put it on the wiki for easy access.
On idea: Rita Rita, a type of asian catfish might be a good fit. It relates to the shape, and rhymes with the similarly duplicate name Mola Mola. (Just an idea, based on some quick wiki-ing). That fish is common in india according to the article, which could also serve as an obscure hint for the Kaluri - Mandarava-Csepel rivalry and traditional corporate espionage, like Kaluri teases MCs with the naming. Also, Rita is a women's name in some languages, which might be strange (or not, at least I don't mind it).
Another good point for Rita genus is that there are a bunch of other fishes in the fammily, if you want to extend this line of ships in the future. (Like the way I did with the Molas, it was a nice surprise when I found out that theres another type of Mola)

Some feedback: If you are around today (sunday, possibly even monday), I can do another cast, showning how I'd make and animate the gear bay doors.
Top

Thanks impaktor! This is turning out to be quite a fun little project :)

And thanks again for all the input nozmajner, without it I would be dead in the water! Seeing that pic really makes me want to get it into a mod (I will have a look at the one you posted but want to have a go at it myself).


Some parts had their normals inverted.


You will notice that the camera tags aren't oriented correctly.

I saw that in the wiki but it made absolutely no sense to me at the time - now it does, I will go fix :) (its a shame the cones would have made it nice and clear)


If you are around today

Im going to find that difficult Im afraid - its another nice day over here and the other-half is bugging me to go outside. I work during week days but I can do evenings if that suits you? Will catch up with you on IRC to arrange :)

As for the name - I agree "Rita Rita" fits well with current Kaluri naming and background. In my head I have been calling it the Bluenose after the Canadian racing "schooner" - primarily because I have an incomplete wooden replica sitting on my mantelpiece (I have to finish one of them, right?) and also because it lets me slang the name to "Bluntnose" which I was trying to work into its history... Either way Im happy to go with what "works" for the game :)

Bluenose, or antarctic butterfish is a nice one. :)
I have some bulkship sketches dubbed Shortnose and Longnose (type of gar), which is an added bonus. 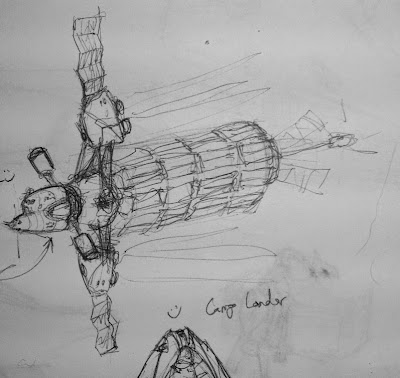 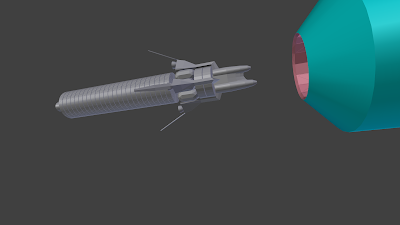 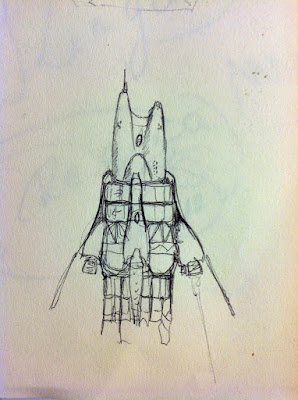 Apologies for the regurgitated update - a number of outside issues have been slowing me down.

I think Im now finished on the basic mesh (no really, this time I do) for this level of detail. I have also generated a UV map based on an AO bake.
I have also got my head around animating the gear AND heat sinks!

My aim for this weekend is to get it into my instance of the game (which I still havent done yet - yes I know, Im sorry).

Thanks to nozmajner for continued input.

Hey! Looks pretty. :)
Don't forget to apply the scale of the fuselage.
Also don't forget that the texture image size should be the power of two (1024, 2048), or it won't work.
It seems to have everything in place for the first test run in the game.

If you have questions about LOD-ing, don't hesitate to ask. :D It's pretty easy actually, mostly removing edge loops, making ngons and disolving vertices after ngon-ing.

Also I post a pic, so those who don't have Blender can take a look. :) 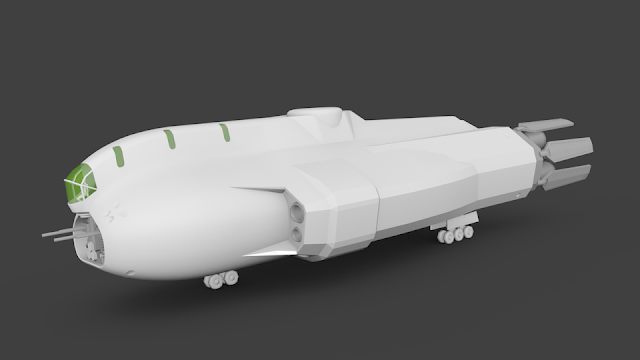 I do love seeing a new ship becoming game ready :)
Looking forward to having this in Pioneer!
Top

I have attempted some LODs (the low LOD is pretty rough) but they are not active yet.

It is currently a little er... fast. I will play around with the stats later.

Some tidying and detail to come.

Finally I got around looking on it properly. Sorry for the wait.
It looks very good.

I noticed that the gear on the rear right has it's normals inverted. Usually it's because it was mirrored, then the scale is reseted to 1,1,1. This tends to invert the normals. You can fix them in edit mode, by W --> Flip Normals or ctrl+N, also in edit mode.

The LODs are nicely made. There's a bit of room for optimization, some unneeded edge or vertex here and there, but nothing severe. I think I'd leave a simple version of the engines on the lowest level too.

I'd also note that you don't need to have the thruster, etc empties on all lods. They are only loaded from the top level LOD. It's mentioned on the wiki article on the model system, but it's a bit tucked away. (Just updated the article to have this bit of info near the tag table too.)

The ship sure feels too strong, I'd put it somewhere between the Mola Mola and the Storeria.
Top

No problems about delayed replies, Im not the speediest at the moment either :) Thanks for the info I hadnt spotted the inverted gear. I have not had time at the moment to correct everything on the list, however I thought I would have a go at paneling as it is not something I have experience with. Basically I used gimp and paths to draw the panel edges then wore down the edges with a combination of masking and funky brush patterns. Im not entirely convinced but its a start. When I get time i will have a look at getting my head around Inkscape. 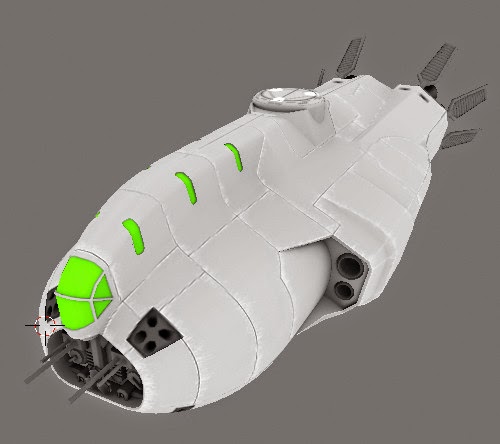