Just to wake this forum up a bit: :)
Here comes the bulkship from Kaluri called Longonse after the trout of the same name:
The base sketch: 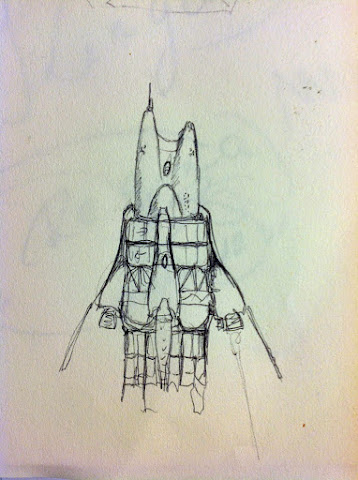 It's a quite large ship, almost 700m long and 150m diameter sans heat sink fins. Actually I might reduce the nacelle size a bit, so it could fit into an orbitals docking area, for emergency situations. (Absolutely not by the book operation). I'm not sure yet, but it seems that a Varada, and even a Xilophis might be able to fly inside the ring area.

It's built in a puller configuration, and the engines are angled away a bit (about 7°) It will only have very weak retro thrusters, and it has an array of RCS thrusters at the far end. (Heh, those thrusters are as large as the main engines of the Malabar).

The front docking collar is the same size as the rear one of the Malabar (And I might reconsider adding a similar one to the Mola Ramsayi). It will have additional smaller docking collars too.

It has a pair of counter-rotating habitat sections for passenger and crew accommodations which are spun down during acceleration. With their 75m diameter at 2.66 rpm (somewhat comfortable) they will provide 0.3G on the rim. Not much, but better than nothing.
The justification for them are the long periods of shore stay and coasting between accelerations/decelerations. I imagine their interiors to be adaptable for both direction of gravity easily. (There's a real life example for that.).

It will house a pair of container tugs for sorting and moving cargo. The containers are 2x the size of a standard shipping container in all three directions (4x volume)
The scaffolding around the cargo area is rudimentary at best, just so I can visualize the concept. On this image it has 127*14=1778 containers. One of these containers is equivalent of 8 TEU container if I'm correct, which puts in the upper third tier among the 100 largest container freighter sailing today. (The biggest, MSC Oscar has a 19244 TEU capacity). I think I will make a version with a block shaped cargo area too, for more capacity.
I imagine that the cargo area is detachable, and the ship could even make a planetfall with powered descent if needed. (also not by the book operation). Maybe it could also be used as a colony ship, transporting all the popup buildings and machinery necessary to start a new settlement, and the cargo frame itself could act as a temporary orbital station after dropping everything planet-side, and the ship as transport for the new settlement.

Some simple renders of where it's at right now: 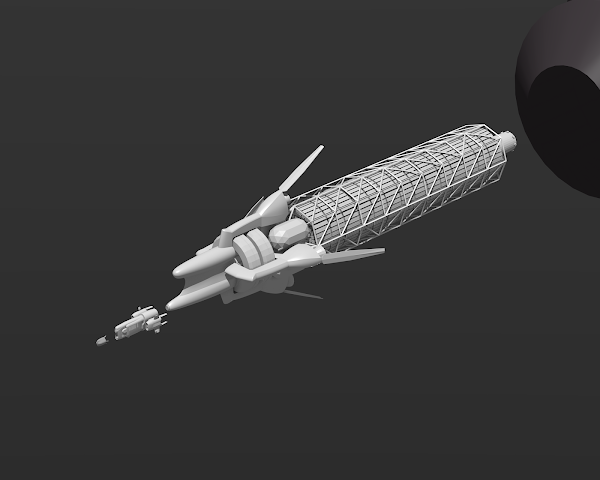 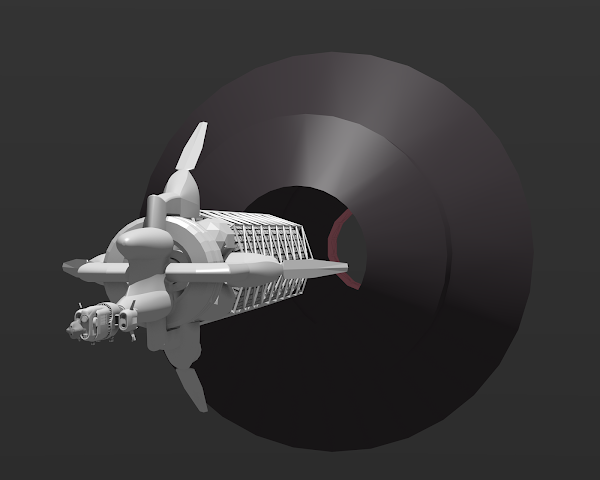 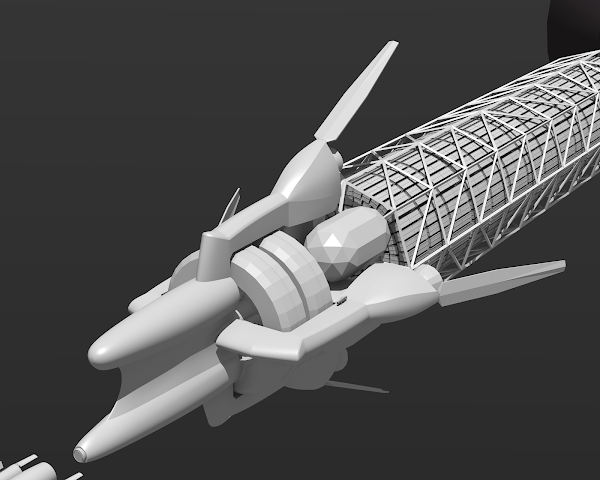 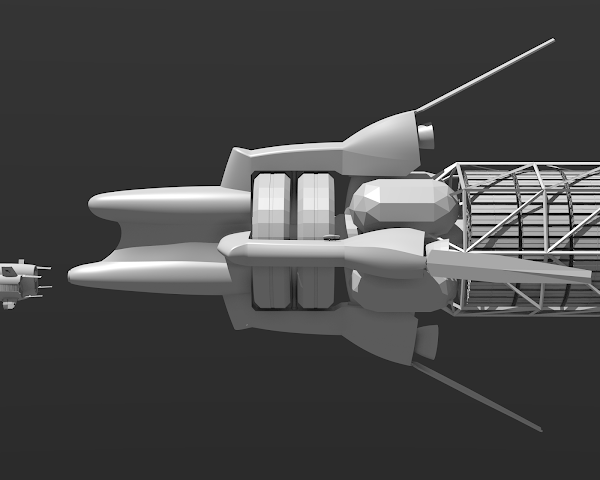 What's the purpose of the stump in the back? Is it just a way to end the ship?
Top

Yes, a way to end the ship, and I'm planning to make the scaffolding anchored there too, and also there's a ring of RCS thrusters for leverage. Also I guess it's a good place to put some sensor and comms equipment too.
Top

Are you planning on this being a static ship or playable? If it's playable and thus "dockable" I might have to do some tweaking to the docking stuff ;)
Top

Thank. :)
Static for now, but if you can do something that makes it able to dock, then I'm not against making it playable. Maybe it could be parked close to a station to use it's services or something?
Top

We're talking about making the ship dockable to the station, right?

Maybe have an invisible cylindrical volume zone around a station that is as a landing pad?

I don't think this ship should/needs to be palyable. Considering the market places aren't big enough to fill a ship like this, nor can the player buy more than one item at a time, (and we break saves often enough so a player should not have time to amass the money to buy this behemoth of a ship).

But if we're talking about this ship docking to the outside of the station, then we're close to ship-to-ship docking, I guess: #3071
Top

Hah! I only just noticed the Varada perched on it's engine nacelle in that last image :D
Top

impaktor wrote:But if we're talking about this ship docking to the outside of the station, then we're close to ship-to-ship docking, I guess: #3071 I think such large ships could also be used as non-persistent stations flying around systems or staying in orbit around bodies.
They could help us make systems busier and clutter orbits that would be too low for practical long-term space stations, they could allow player docking for trade or specific services or serve as mission specific objects.
We could have various types of very large ships - trade ships, research and exploration vessels, mobile mining bases, large scale construction ships, military capital ships, colonization ships, etc.

As for the ship itself it's interesting and quite successful application of Kaluri style to very non-Kaluri type of object (all those hab rings, tanks, cargo section). I think it could use having smoother hab rings and maybe a bit flattened, busier and more spread apart (to avoid sharp "shoulder" on transition from prong to the part going around the rings) nose prongs, but it already looks great.
Top

Ohm the shoulder thing is intentional. The proportions of the ship were quite goofy when I kept to the sketch closer, and the nose area was bigger. And made the nacelles seem flimsy. And I don't want to make it too streamlined too.
Here's how she looks right now: 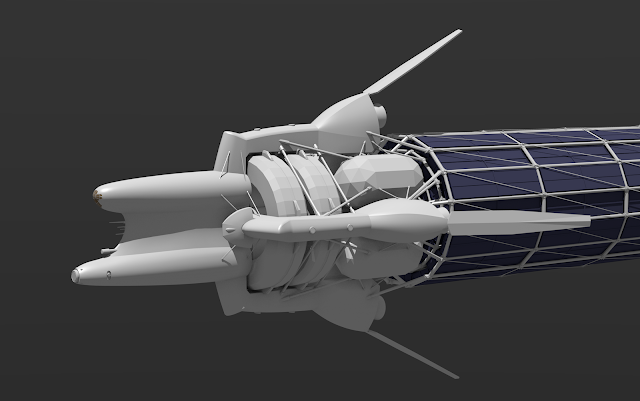 And here's a mod if you want to look at it ingame.. It's at 189k tris right now, but it will sure see some optimization at the end. No textures, and only a tiny cube of collision mesh at the center. So it's safe to pick up that Varada and fly trough the holes in it. That tiny ship can fit in a lot of places.

That attached shuttle is about as long as the Sinonatrix, and I will make that a separate flyable ship when this is finished.

There are some docking collars around the ship, both the smaller ones, (sides of the lower nose, same as on the Kanara), mediums (Same as the side ports of the Malabar, they are on the nacelles, and for the shuttle) and large one on the nose.

The smaller struts on the front might not be there on the final version. I haven't yet made up my mind about them. (@impaktor :D)
Top
Post Reply
46 posts