Despite it being relatively simple in shape, the "Block" is weighing in at 30,400 tris which Im putting down to overly ornate thrusters and cargo loader detail.

Im not sure I should model a cockpit or even what it should look like...

Im expecting the landing gear to be a simple affair retracting into the main fuselage. I can add further greeble using decals/normals. 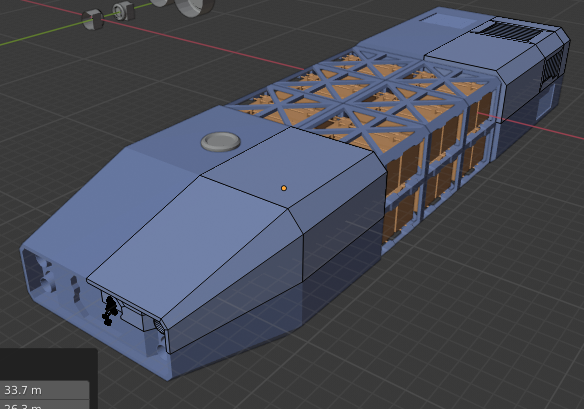 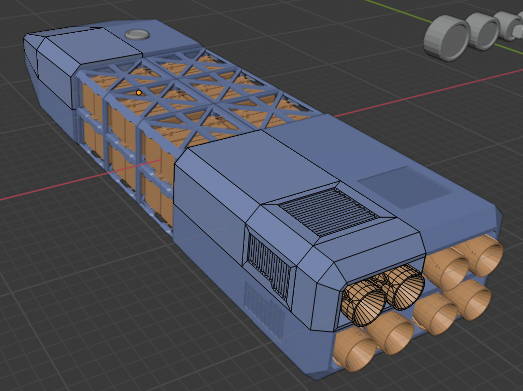 Not a lot of outward change but have done a lot of cleaning up of the mesh. Despite that, the tri count has gone up! 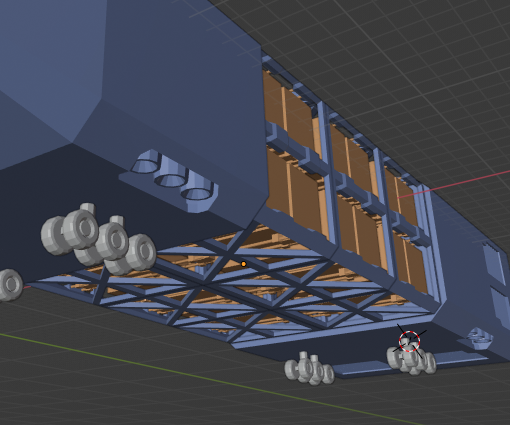 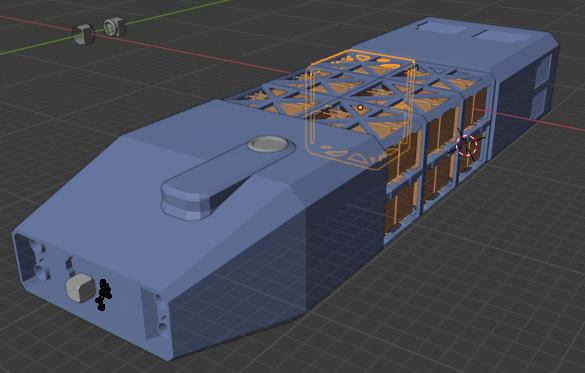 I wonder if wheels are the way to go? This ship wont be starting from a runway, I assume. Then maybe tri goes down when modelling them as helicopter landing support rather than circular wheels?
Top

I thought about supports/skids and those are still an option. I had a discussion with Noz way back when doing the Bluenose. It went along the lines that wheels are useful for manoeuvring on the ground i.e. towing out of the way or fine adjustment etc... happy to take guidance.

Also, Im not sure we would recover many tris by replacing them :-/ The rear engines are still over engineered so I can reduce the count simplifying those.
Top

I prefer wheels, even though they are adding to the tri count. Easier to move them around on the ground.
But on the other hand, the other Haber ship, the Lunar Shuttle has legs.
And as far as I gathered, tri count isn't that important metric nowdays anyway.

I like that cockpit you put on. And I see you are using the docking collar templates. :) I'll check the model itself later, I only looked at the pictures yet, but it is looking good.
Top

I still need to do some more tidying up but I think I am there with the general design.

At this point before I go any further, if anyone wants to comment on how this looks or if they want me to tweak the style or whatever say now before I move on to the UV textures etc :)

I have pushed my blend up to my repo for those that want to have a closer look:
https://github.com/BobTheTerrible/pione ... lock.blend 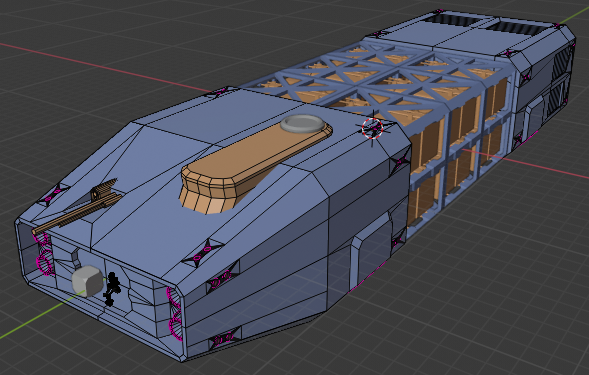 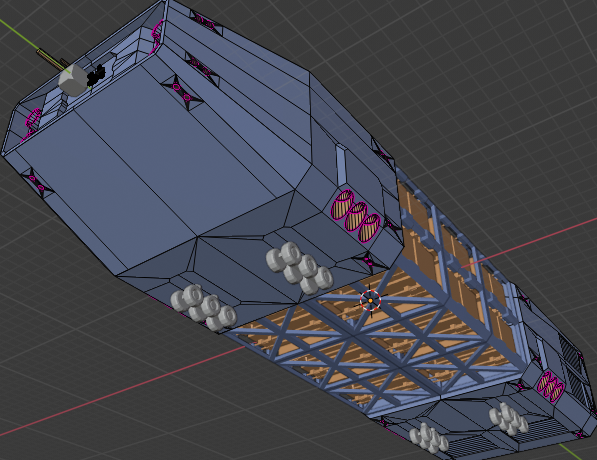 I think it is looking really good, and the modeling is nice and clean.
But I'd detail it a bit further on the model. I could do some draw-overs if you want, could be helpful for this and the surface details as well.
Top

Thanks for the input Noz - impressed you were able go through that investigation so quickly!!

RCS thusters:
* I like that additional detail - will add
* I can reduce the node count

Engines:
* complete fluke that the size of any the thrusters matched your templates - it was all done by "meh, seems appropriate" :D
* those cones are pretty basic - Im open to adding some more detail if you think appropriate

Radiators:
* they are really nice and I can look at adding those, tho the tri count will definitely shoot up

Landing gear:
* I feel like I should learn how to do this although for expediency Im sure you could knock something up in an evening that would take me weeks to build! Give me a bit of time, but I might just pass that over to you.

Cockpit:
* the windows are meant to be angular, similar to the bridges you see on ships. To me, angular sort of fits with the over all blockiness of the ship. I can certainly add some additional relief tho I was wondering if this could be achieved using decals/normals

Loading bay:
* I had similar thoughts - the hight makes it difficult to load from the ground. My rational was that it is not unusual for airports to have mobile rising-platforms to get luggage and cargo into the holds of aircraft. I would have assumed there would be similar equipment at a starport. Having said that, it dosnt really fit with the over all style of other ships in pioneer so I will have a rethink.
* had similar thoughts about adding a ramp in texture

Draw-overs and surface details:
* always happy for these!! You have significantly more ability than I in this regard :)

Thanks for adding me to your repo!!

I could record myself doing the landing gear, to show the process, if that helps.
In the Sino rework, the RCS boolean cutters have adjustable division count, you could use them. Might be easier to cut them, then cleanup on the slanted surfaces at least. I just got the idea looking at your model on how to achieve that adjustability.

The angularity of the window at that angle feels a bit odd, feels like a low-poly curve, but adding some detail to it might alleviate that, but not sure. We will have to try it out.

I could record myself doing the landing gear, to show the process, if that helps.

I actually think that would be an awesome resource for other contributors like me who don't have a firm grasp of Blender/3d modelling.
Top
Post Reply
29 posts