We were talking about a possible scanner equipment on IRC. One, which would put some more things to do in the hands of the player, porviding an instrument to find things. Main inspiration came from Limit Theory of course. :)
A quick mockup: 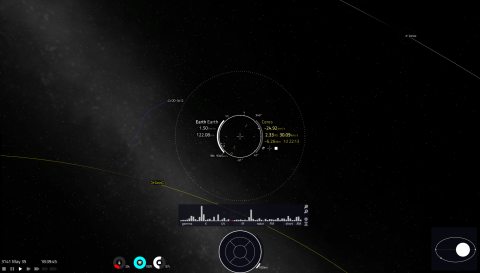 So just to start that conceptual document (will edit based on discussion):

A scanner equipment and it's UI for discovering stuff.
How it could work: Possible gameplay: Technical things i can guess:
Top

Sweet. I was thinking that our conversation needed to be saved.

First post over in Other space games: Limit Theory is highly relevant as reference.
Top

Really great ideas! It would put "searching" back into the "Search & Rescue" missions. I like the "save a specific pattern on the scanner" part.
Top

I really like the idea and mockup image. Extending it just a little bit:

Reminds me of something similar I've read about couple days ago: https://dev.arma3.com/post/oprep-sensor-overhaul

In short, there are passive and active sensors. When being passive you read less data, but you are at the same time less visible to others. When you enable sensor you can see more, but at the same time your position is easier to reveal too. There is risk and decision what to use.
Top

Is there light lag in Pioneer? You can see ship positions on the orbital map, but theoretically those positions should be minutes or hours old.

That, plus range limits on scanners (resolution and sensitivity), should make tracking ships very difficult. Good luck for the bounty hunters out there finding fugitives that shouldn't be actively transmitting IFF or any signals at all on a wide beam.

There probably needs to be some kind of FTL sensor (gravitic over sub-space or witchspace) that indicates object position, size, and limited info on movement. Something that will allow you to find a blip to check out. Stealth could then be used to mask that signature. Hiding next to a space body would do it, maybe. Combine that with EM absorption and emission control tech, and you have strategies for hide and seek. Just an idea.
Top

No light lag as of now.
Being able to see all ships real time isn't intended in my opinion, and yes there should be a range to the sensors. There's a soft limit right now in master, but that's just the UI hiding ships further a certain distance.

I think we still should not have FTL sensors (or comms for that matter, and if you have one, then you can make the other anyway). The less handwavium, the better in my opinion.
And you can still have stealth I think, especially on long ranges. Sure each ship could be picked out as far as Pluto, but sensors on civilian ships I think won't be that good, so they would rely on the transponders, and maybe in civilized system the STC could broadcast the position of every known ship.
So a scoundrel would have to risk alerting the police/military to it's presence and ill motives by turning off the transponder. But they might have enough time to pull of a deed and jump away before the authorities catch up. Depending on the traffic in the system, they might fly under the radar for quite a while, but they could alert the cops right away. Stuff, like turning off the transponder behind a planet or when you are close to a bunch of ships might make your chances better in the same manner. (this would assume dice rollings, or having actual sensors placed in the systems I guess)
Which would make piracy real risky for the player too, as it should be.
Top

Yes, you might be right about FTL abilities. It would change the dynamic of the game. I might implement something as another experiment, but that wouldn't make it into the main build.

There is a novel by Ian Douglas called Earth Strike which has the most amazing desciptions of space battles with realistic physics. No FTL star trekky stuff other than copious use of nanotech. Both capital ship and fighter combat in space. Check it out for ideas.
Top
Post Reply
8 posts • Page 1 of 1