by WKFO
Last night I was going home with one of these: 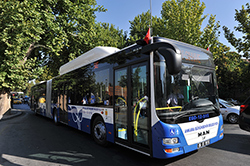 ...and sitting in the rear-est seat, closest to the enclosed engine part that makes a very interesting sound. Then suddenly this bright idea came to my mind so I stopped staring out of the window, took my smart phone out of my pocket and started recording the engine while trying not to look weird.

Anyway, this is what I have after some audio effects applied:
https://ufile.io/d2sht

by nozmajner
These are great!

by FluffyFreak
Yeah they're good. Do you want them just for the military hyperdrive(s)?

by WKFO
https://ufile.io/jmtfv
I've added a slight panning effect. I also created a modified version of the "Hyperdrive_Jump" sound which plays when we are in transit to another star system.

Oh, and there is this... I realised the current sounds are single channel ogg files while these new ones have two channels. They work very well as far as I've observed but could it create technical issues on some platforms?

Oh and I don't even know how I should implement this in code so we will have some time to discuss the sounds if we want :D

But for a continous jump-sound in hyperspace, wouldn't it need to be able to loop the file seamlessly?

by WKFO
It doesn't. I mean the game, it doesn't loop the file. We don't have a "hyperspace ambient" sound effect. The standart hyperspace sound doesn't loop either. I don't mean "seamlessly", it doesn't loop at all. The sound just stops and you are left with cockpit/crew/ship ambiance.

by jpab
PR to bring the new military drive sound effects into the game:
https://github.com/pioneerspacesim/pioneer/pull/4202

by FluffyFreak
This PR has just been merged!

It might take a while for us a to get a new build out with it being Xmas etc but the next one will have them.

Merry Christmas!
All times are UTC
Page 1 of 2