If it bleeps, it goes here
Post Reply [phpBB Debug] PHP Warning: in file [ROOT]/vendor/twig/twig/lib/Twig/Extension/Core.php on line 1266: count(): Parameter must be an array or an object that implements Countable

9 posts [phpBB Debug] PHP Warning: in file [ROOT]/vendor/twig/twig/lib/Twig/Extension/Core.php on line 1266: count(): Parameter must be an array or an object that implements Countable
• Page 1 of 1

I thought we could use more sounds.
My ideas (so far) are:
What do you think?
Top

The way docking is handled in Rogue System is quite interesting in my opinion, UI and sound wise.
There are two sine tones playing, and they start to harmonize as you align with the dock. The two tones are representing the X and Y position I think.
The ping speeds up as you get close.

I started thinking about a docking UI last summer, but it still needs work: 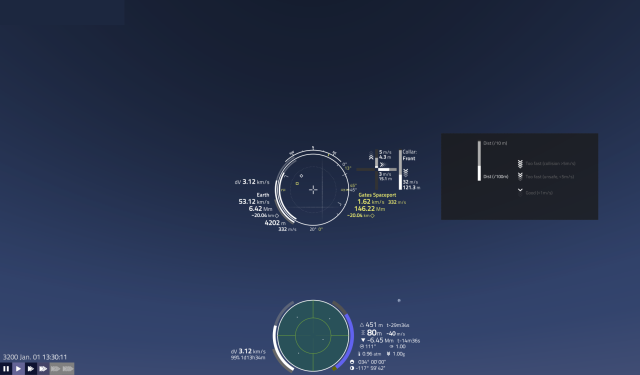 It's quite similar to the Rogue System one and the Orbiter one. The positioning might need some work still. And I think it might be possible to put it inside the reticule more organically. Like as a docking mode for the HUD.
Top

You've got me thinking about the docking/landing HUD.
I think all related stuff could be placed inside the reticule: 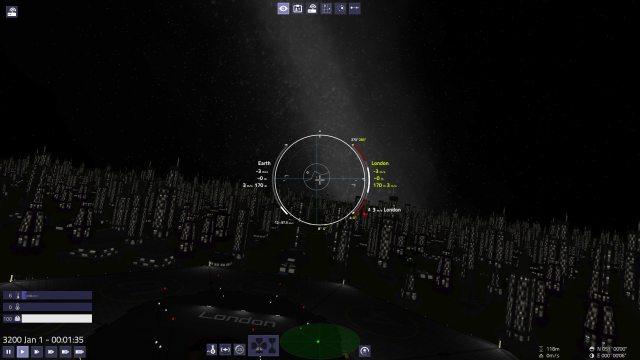 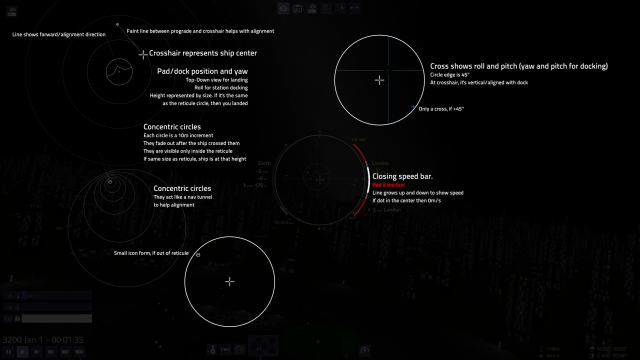 There would be a cross all the way to the reticule edges, to represent roll and pitch (yaw and pitch for orbital station docking). If that cross is in the center, you are aligned. Kinda representing where the ship's belly is pointing (nose for docking). So if you roll left, the cross goes to the right.

The pad position and height could be shown with a circle with a direction indication and some concentric circles.
-If the pad indicator is at the same size as the reticule, you are at 0m
-The direction component of the pad indicator would represent yaw (roll for docking).
-The position of it would show the position as if you were looking down (looking forward for docking)
-Each concentric circle represents a 10m increment in height/distance. The speed of the circles would intuitively show the speed of the ship, and the direction of the motion, since they'd act as a nav tunnel.
-The pad indicator could even rotate to show orientation in a spatial manner, but it might feel odd.

There's no separate indication for the speed on each axis, only closing speed. The prograde/retrograde indicator and the concentric circles would represent the direction component nicely in my opinion. A faint line between the crosshair and the prograde indicator could help with positional alignment too: if it crosses the pad center, you are going in the right direction.

In the end, if everything is at the crosshair, you are aligned, positioned properly, and flying towards the pad.

Closing speed is shown with a bar at the left side, alongside with the braking indicator. The bar would grow up and down with speed, and would turn red if you are flying too fast for safe docking.
Or it could be a bar that can go up or down from the center, indicating closing and getting away directions. Up for getting away, down for getting closer.

A hover autopilot mode could be handy for planetary maneuvers like this. Practically a set speed mode, but not on the main axis, but up/down. Could use the same set speed shortcuts even.

To test it quickly you can just swap the abort sounds with these.
Top

Cool. They sound similar enough that they could be the same. Not a problem, as the player will hopefully not hear this sound often enough to "learn it by heart". Or, having two files like now is good for implementation perspective. I'm just thinking out loud.

We need code to trigger these files upon a break down, I assume?
Top

Yes, it will need a bit of coding.
The sound will just add an extra "oh my god" factor to the situation. Currently, getting your hyperdrive broken in Pioneer is not easy, since you have to play for a long time without any hyperdrive maintenance.
Top

The hyperdrive warmup sound we have only lasts 10 seconds, while hyperdrive warmup time varies between 6 secs and 18 seconds depending on the hyperdrive class. I think it kinda works for hyperdrives with warmup times less than 10 secs, but not for those with warmup times longer than 10 secs. It is not an immediate life-threatening situation for Pioneer, but I find it a little awkward. As a solution, sound effect could be extended to last 18 (or maybe even 20) seconds, or "Maybe the charge up time should be fixed." as impaktor suggested.

I just had an idea. Why don't we have a "realistic audio" option which slowly volumes down and eventually disables sounds on external view (and only plays player ship sounds in internal view) when the player gets out of atmosphere?

9 posts [phpBB Debug] PHP Warning: in file [ROOT]/vendor/twig/twig/lib/Twig/Extension/Core.php on line 1266: count(): Parameter must be an array or an object that implements Countable
• Page 1 of 1

Return to “Music and sound assets”